Those three words, engraved on the back of nearly every Apple device, refer less to an American state than to a state of mind.

If ever a vehicle embodied this mythical land then surely it is the Meyers Manx dune buggy. And if one man personified the California ethos required to birth such a car – the whimsical imagination of Walt Disney, the design chops of architect Richard Neutra, and the execution skills of the Wright Brothers – then that man was Bruce Meyers, father of the Meyers Manx. 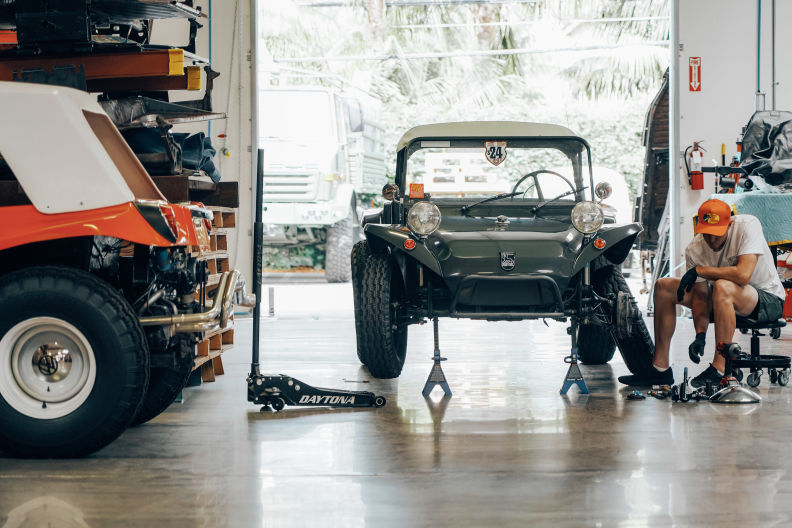 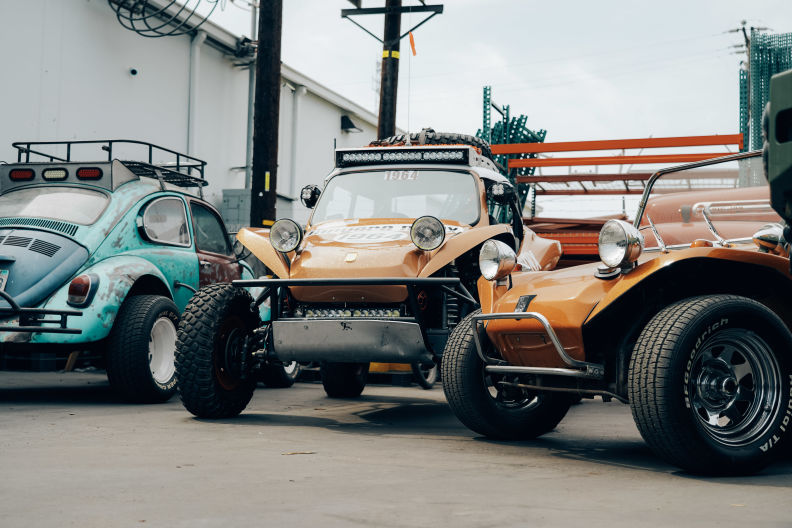 Born in 1926, Meyers – whose dad Henry Ford sent west to open a Ford dealership in Los Angeles – grew up surfing and sailing in Manhattan Beach before heading off to become a war hero in Okinawa during World War II. A couple decades later, after sailing all over the South Pacific, Meyers would design, build, and race the Meyers Manx, inspiring the creation of the Baja 1000 off-road race in the process.

We truly respect what Bruce created, not only in the design of the vehicle, but also in how it transcended being just a vehicle...

The original Meyers Manx featured fiberglass bodywork (a byproduct of Meyers’ experience in boat-building) and a flat-four, Volkswagen Beetle engine bolted to a modified Beetle frame. Light, quick, and capable both on- and off-road, it quickly became an icon, a motorized totem of California, granting access to sun and surf, deserts and beaches, promising an escape from the drudgery of everyday life and the winters back home in Buffalo. 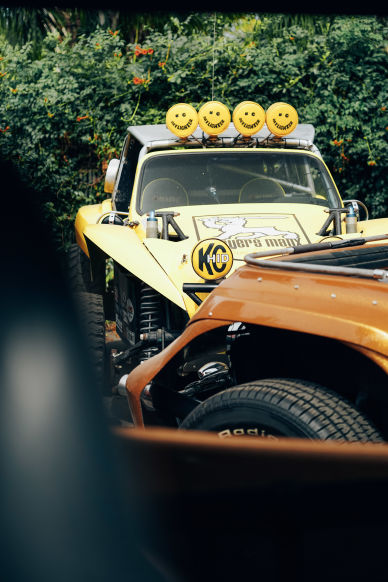 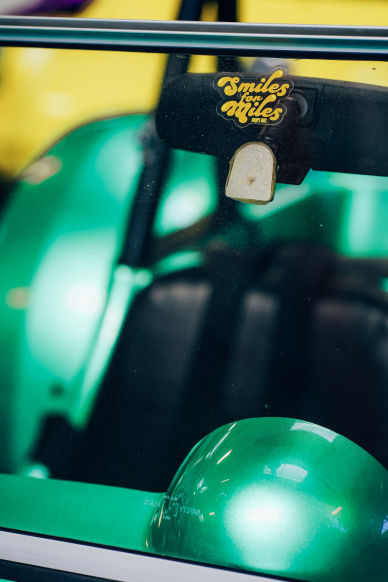 By the time Meyers passed away in 2021 at the age of 94, he and his companies had produced approximately 6,000 legitimate Meyers Manx dune buggy kits (chiefly between 1965-1971). Competitors, meanwhile, freed to imitate when Meyers lost a court case in defense of his patents, produced some 300,000. Leonardo da Vinci may have been correct when he noted that simplicity is the ultimate sophistication, but it’s also true that the simpler you make something, the easier it is to copy.

It is the legacy of the original Meyers Manx, however, that Freeman Thomas – himself a renowned car designer and yet another product of California’s rarefied atmosphere – is now working to preserve and to evolve. Born to a military family that bounced around the world, Thomas spent much of his childhood pedaling around the streets of Cypress, California with friend (and fellow Porsche mischief-maker) Jeff Zwart. By the 1980s, Thomas was a star pupil at the ArtCenter College of Design, during which time he interned under the likes of GM’s Larry Shinoda (known for, among other designs, his work on the C2 and C3 Corvettes and, while at Ford, the Boss 302 Mustang). After graduating, Thomas went on to work for Porsche, Audi, VW, DaimlerChrysler, and Ford. Like Meyers, Thomas made a name for himself by helping to bring iconic designs – the Porsche 959, the Audi TT, and the Volkswagen New Beetle, to name a few – to fruition.

Our goal is to offer a fun, lightweight, exquisitely-designed, integrated vehicle that makes you say, ‘I want that.’ 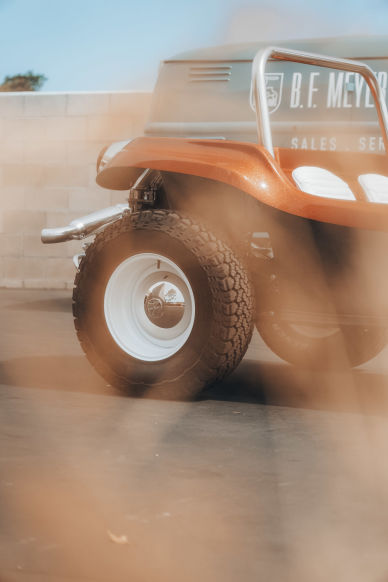 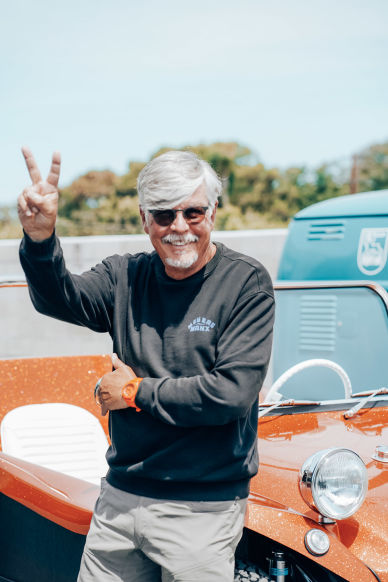 In late 2020, the legends of Meyers and Thomas became forever linked when Thomas was named CEO of the Meyers Manx company, a modern iteration of Bruce Meyers’s original dune buggy firm and one that Thomas, along with partner Phillip Sarofim of Trousdale Ventures, acquired that same year. While we may not get a look at the fully revamped Meyers Manx for a bit, Thomas is already bursting with ideas for this new challenge, even as he is fully aware of the obligation he bears in carrying an iconic design into the future.

“We truly respect what Bruce created, not only in the design of the vehicle, but also in how it transcended being just a vehicle,” says Thomas. “[The Meyers Manx] crossed over into the entertainment industry with Steve McQueen and Elvis Presley, and people just love it as a fun, carefree vehicle that was not ostentatious. It was minimalist and endearing.”

True to their DNA, the “Manx Classic” generation of Meyers Manx buggies will still be based on a Volkswagen chassis and air cooled motor (“Our backlot is filling up with old Volkswagen donor cars now,” says Thomas). “Manx Modern” will feature an all-electric powerplant designed to ride atop its own all-new, modern, bespoke monocoque chassis and body. 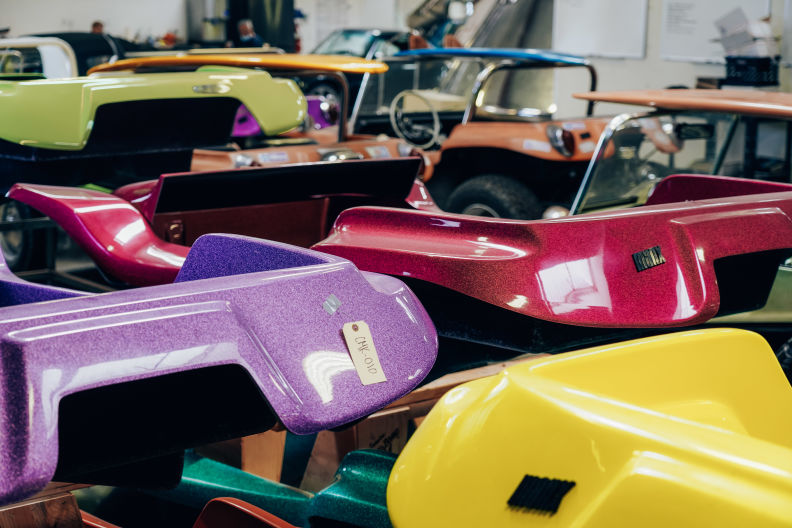 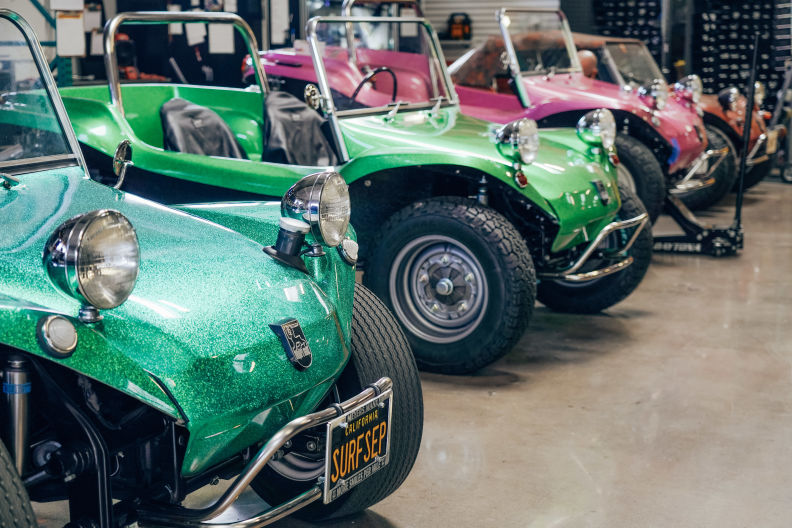 “It’s really the natural step,” says Thomas. “The Meyers Manx was always designed for an air-cooled Volkswagen engine that has a lot of things in common with electrification, such as minimal parts.”

For Thomas, this push toward electrified dune buggies stems not just from a concern for the environment but also, as always, from Thomas’ own compulsions as a designer.

“Most electric vehicles I see on the road are not endearing to me,” he says. “They’re just a normal car with an electric power plant in them. Our goal is to offer a fun, lightweight, exquisitely-designed, integrated vehicle that makes you say, ‘I want that.’” 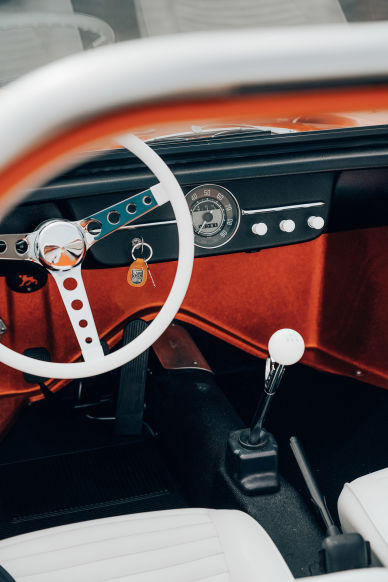 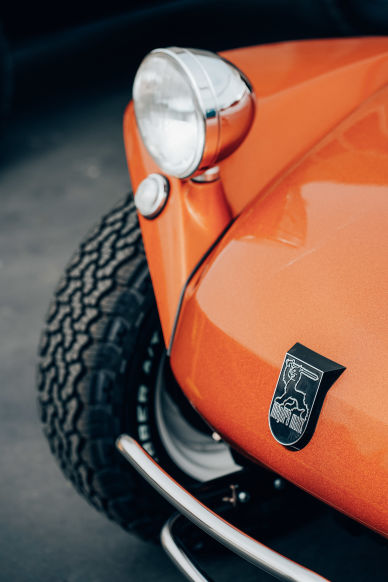 True to the Meyers Manx’s reputation for customization and limitless possibility – and key to making the would-be buyer say, “I want that!” – the Meyers Manx team will offer customers the opportunity to create their own bespoke buggy. After all, while a Meyers Manx is equally at home on the North Shore of Oahu or the streets of London, the owners in these disparate regions will have their own unique adventures and needs. And besides, notes Thomas, the Meyers Manx is as much about a lifestyle as it is about mere transportation. So, if you want a kit that you and your family can build together, they’ll have one ready for you. If your preferences run toward custom, paint-to-sample bodies paired with made-to-measure interiors, they will accommodate your wishes on that front, too.

It’s an attitude that would have resonated with a young Richard Neutra, freshly arrived in Los Angeles from Austria in 1925. “I found what I had hoped for [in California],” he wrote, “a people who were more ‘mentally footloose’ than those elsewhere, who did not mind deviating opinions … [a place] where one can do almost anything that comes to mind and is good fun.” 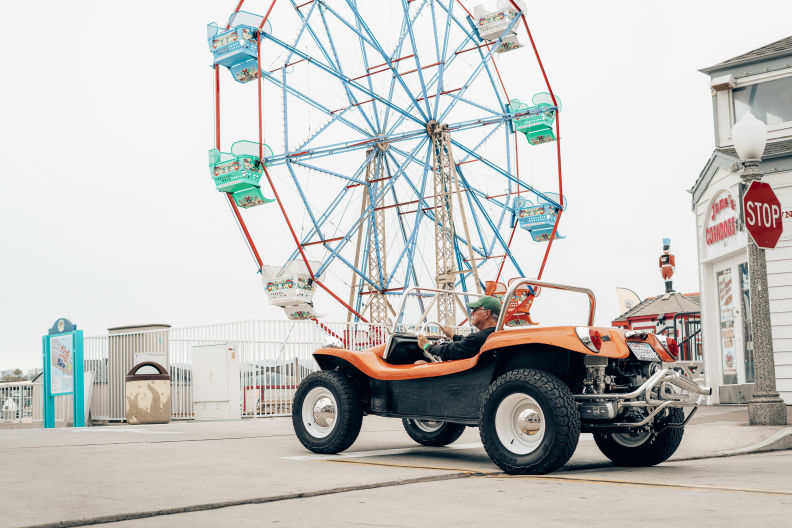 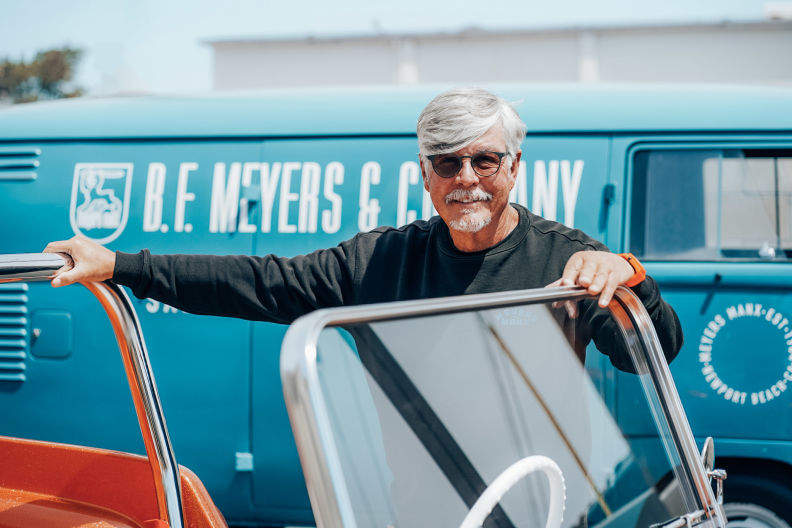 May the sun forever shine on Freeman Thomas and his team for keeping California, the Meyers Manx, and good, old-fashioned fun alive.

Elise Talley is a SpaceX engineer and photographer with a love for classic cars. She is based in Long Beach, California. You can find more of her photography on her Instagram (@starlordesss). 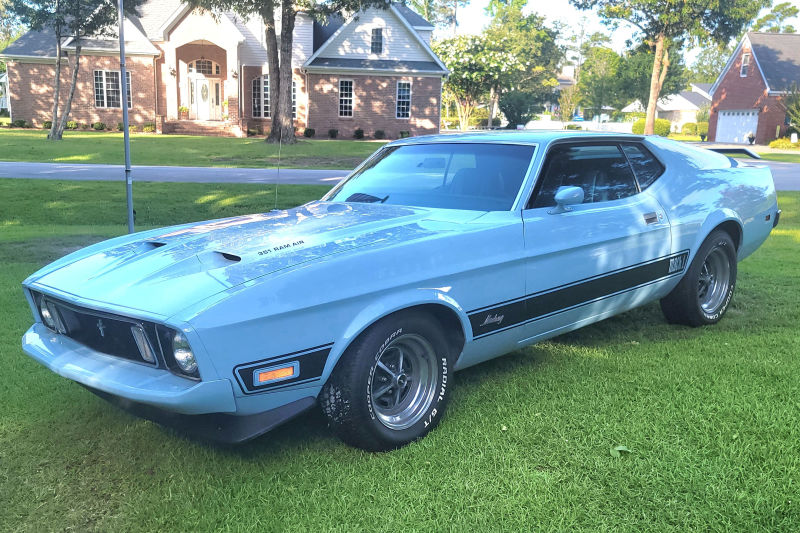 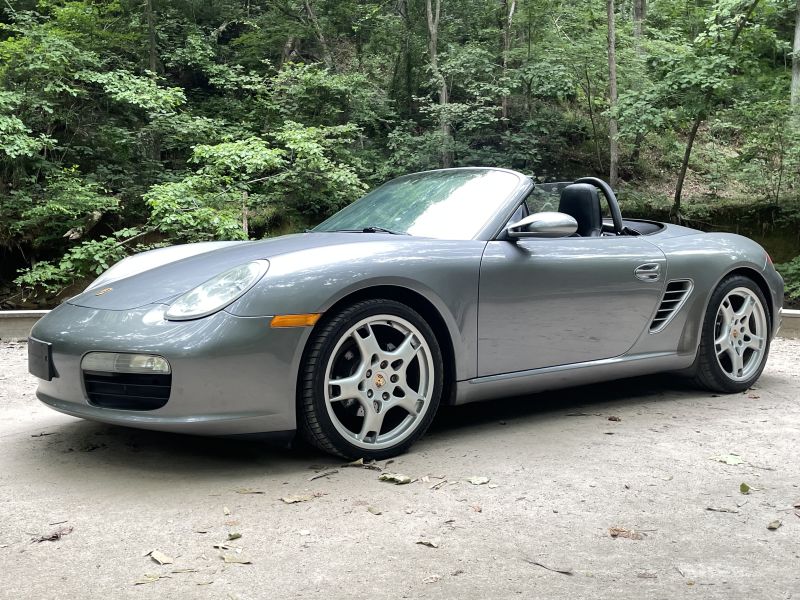