Written and Photographed by Greg Bodene

The jokes, by now, are old hat.

How do you spot a vintage Land Rover? Look for the nearest coffee shop parking lot.

Whether justified or not, vintage Land Rovers have become the 4x4 rig of choice for enthusiasts who want to project the image of off-road capability without ever intending to venture over anything more rugged than a speed bump. The Mattson family of Reno, Nevada, however, stand as a one-clan refutation of this stereotype, proof positive that, with the right approach – and plenty of ingenuity – these old British farm trucks can endure some of the most rugged terrain in the Western United States. 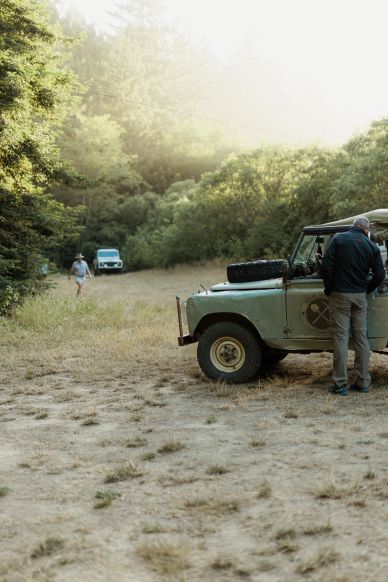 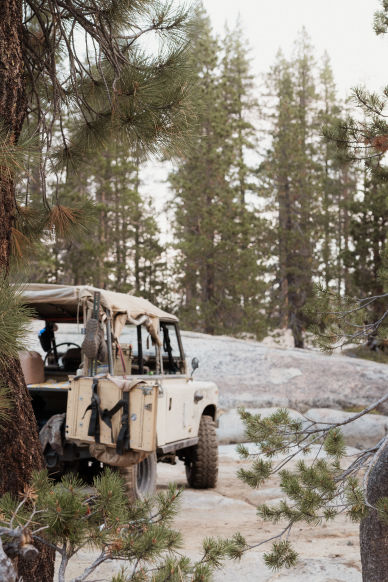 The Mattson adventure begins with paterfamilias Marvin Mattson, a Minnesota native who, upon leaving the Navy in 1973, found himself in Reno on his trek back home and decided to enroll at the University of Nevada. To pay his bills, he took a job at a local service station doing oil changes. Marvin eventually found that he enjoyed his mechanic hours more than his student hours and settled into a life at a shop that specialized in English and German cars, honing his skills and finding his passion via a procession of Jaguars, MGs, Triumphs, and Mercedes.

“I’ve always been a fan of English cars,” says Marvin. “Their lines were aesthetically pleasing and the sports cars really handled, especially when compared to large gas guzzlers of the 1970s, which were great, but for the mountain roads the smaller MGs had an advantage”. 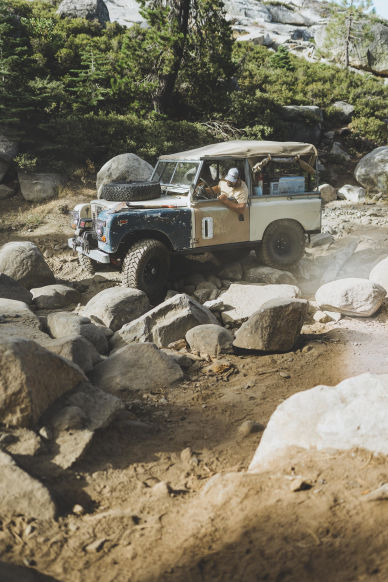 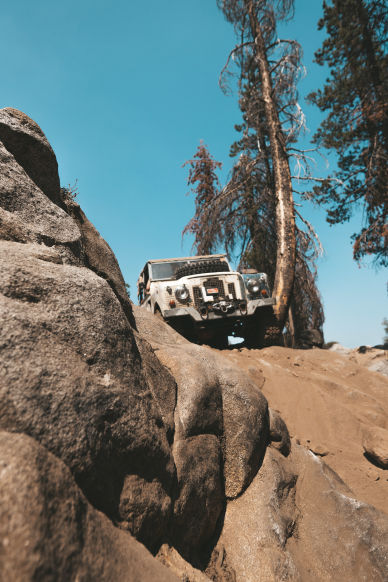 One day, a customer drove up to the shop in a 1966 Land Rover Series IIa pickup. The truck just needed some maintenance but the customer ultimately elected to trade the rig in and buy something newer.

“That was the first Land Rover I had seen up close,” recalls Marvin. “I just fell in love with the body lines and loved how utilitarian it was. The tire on the hood was just the coolest thing.”

Like many Americans at the time, Marvin had gotten his first glimpse of these Land Rovers on Mutual of Omaha’s Wild Kingdom, the wildlife documentary TV program featuring host Marlon Perkins that began in the 1960s and often featured old Land Rovers on safari in East Africa, lending an exotic tinge to their utilitarian lines. 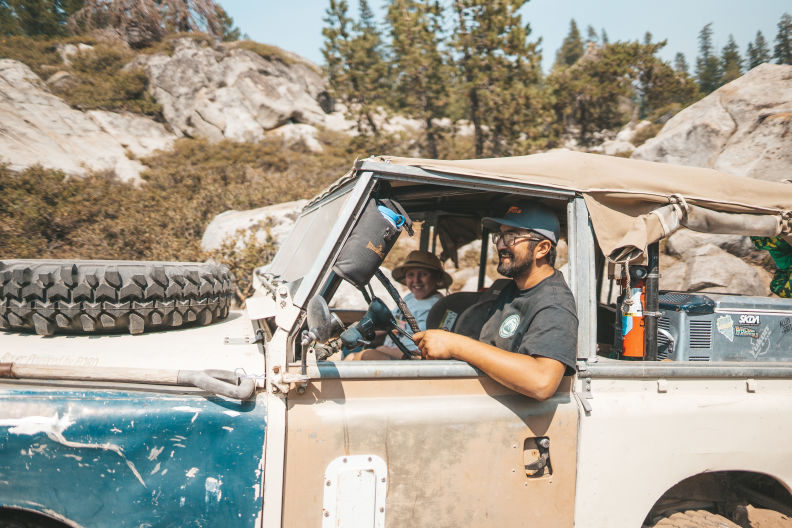 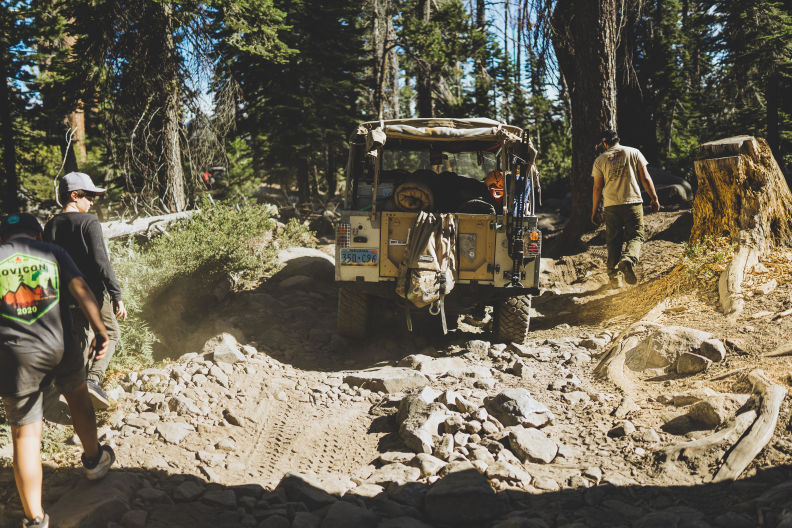 “I found those expeditions to the African savannah so fascinating,” says Marvin. “They always had various iterations of Series Land Rovers – from pickups to wagons – and that was something that you hadn’t really seen in the US too often.”

Shortly thereafter, the first Land Rover Marvin had seen became the first Land Rover he ever owned. He sorted out its mechanical gremlins (which included, not surprisingly, some electrical problems) and quickly made it his daily driver.  And before long, he was tied into a local Land Rover community that made a point of exploring the vast deserts and towering mountains of Nevada and Northern California. 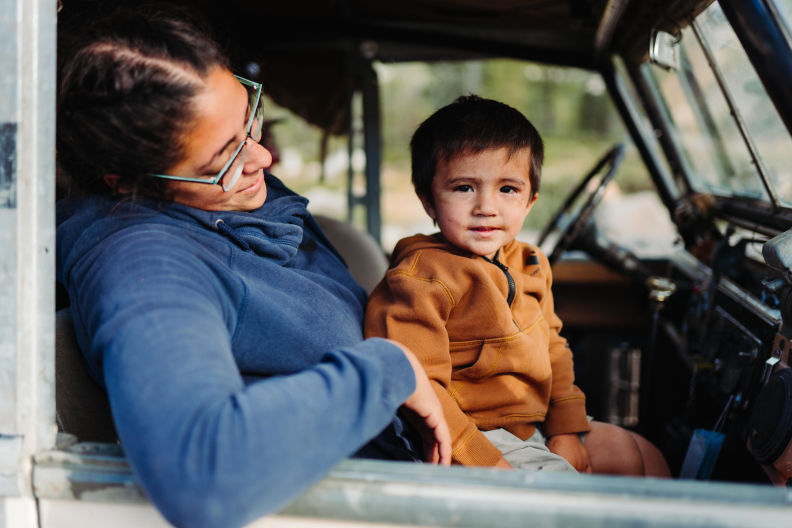 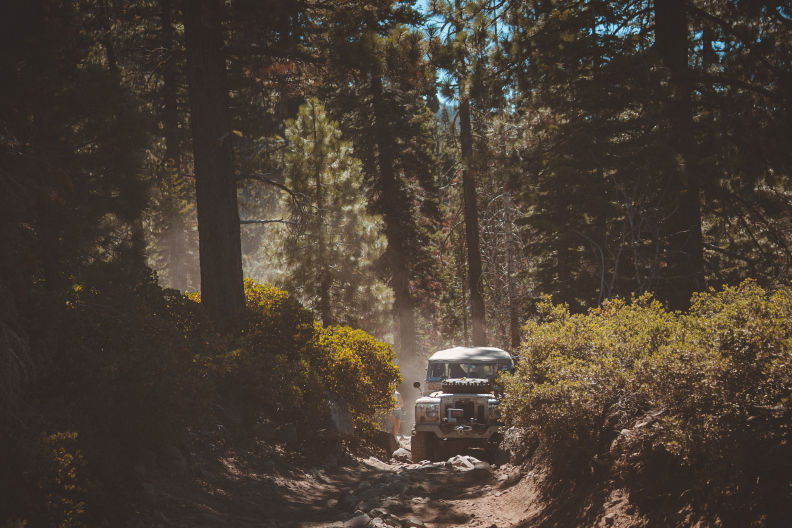 For more than five decades now, Marvin and his wife have been touring the West, enjoying weekend trips into the Black Rock Desert, exploring the countless mines and hot springs throughout Northern Nevada, and undertaking longer expeditions to Death Valley.  And lest you think that these trips have been leisurely, “do-it-for-the-’Gram” jaunts down fire roads, consider one particular trip out to the Black Rock Desert… 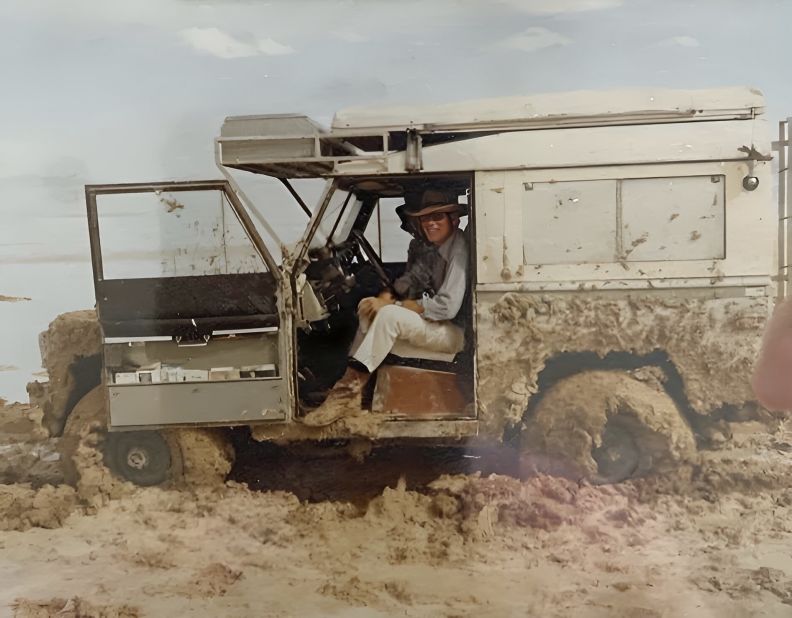 One Memorial Day weekend in the late 1970s, a few guys from the local Land Rover club headed out across the Black Rock Desert. The goal: to reach the other side of the Playa where a river dumps out. Why? Because, well, why not? After all, how would they know if this was doable unless they gave it a try?

On any trip like this, the crew expected to encounter mud, and they expected that someone, maybe everyone, would get stuck and require a winch. During this particular year, however, the mud was deeper than anyone could remember it being and, indeed, they all ended up stuck – and not just stuck, but stuck for days. The crew tried everything to extract themselves, even to the point of removing everything that could be unbolted from the Land Rovers to make them as light and as easy to winch as possible.  Despite their best efforts, they remained mired in the muck. 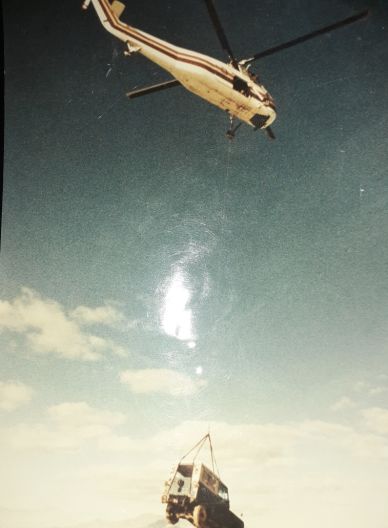 “That,” concludes Marvin in a moment of understatement,  “was one of the most memorable trips by far.” 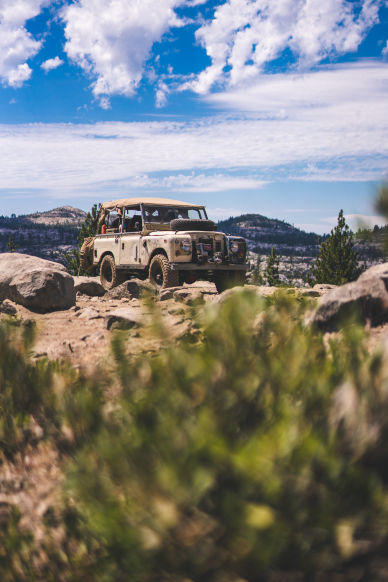 This is the world – and the lifestyle – into which Tyler Mattson, Marvin’s son, was born in 1992.  Marvin and his wife, Nancy, had been adventuring for years before the kids were born and they saw no reason to stop just because they now had babies in tow. The kids, quite simply, never had any choice but to go along for the ride.

By the time he was in high school, Tyler was a Land Rover owner and enthusiast in his own right after coming into possession of the Series IIa Bug Eye pictured here when he was 15 years old. From the very start, the Land Rover was a rolling education: the engine needed a full top-end rebuild and the brakes were shot. Far from being a burden, however, Tyler immediately saw this as an opportunity. 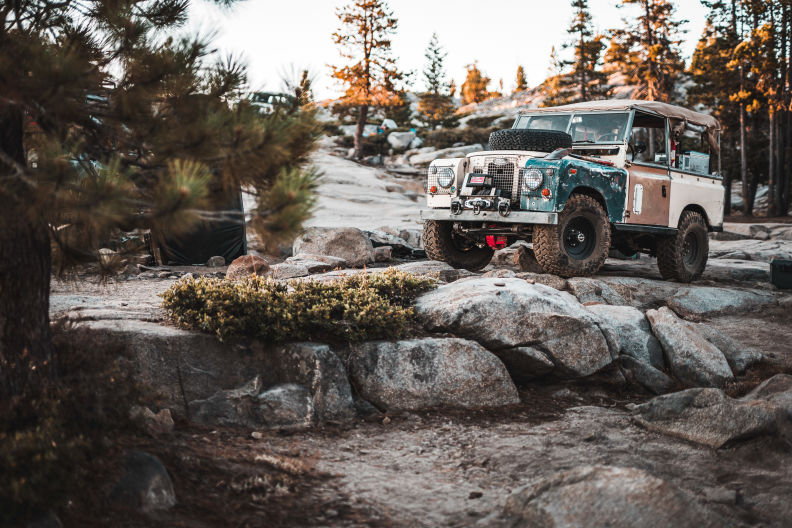 “It was a great learning experience and a chance to spend time with my dad,” says Tyler, “I definitely learned a lot from him and the fellow club members as I worked through the little things.”

Tyler drove the old Land Rover through high school and into adulthood. Around 2015, however, the drivetrain started to fall apart and Tyler decided that the time had come to do some serious surgery on the rig.

“I had gotten to the point where the engine was continuing to burn oil and I decided it wasn’t worth rebuilding,”  says Tyler. This is the point at which delicate purists might wish to stop reading. 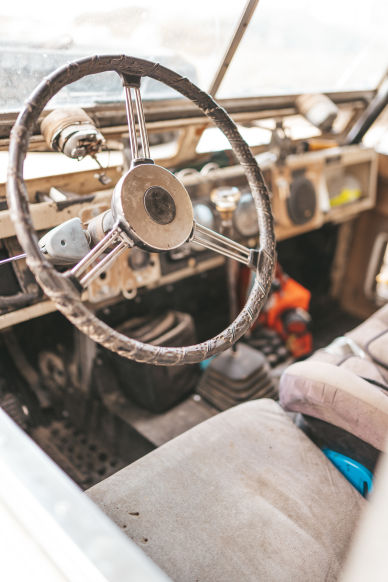 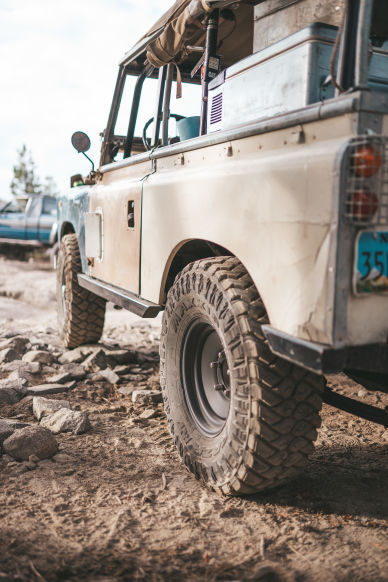 For the powerplant, Tyler worked a deal with a friend who had a Ford inline-six engine sitting around. He also picked up some Dana 44 axles with an eye toward trips to Moab, the Rubicon, and Fordyce, as spare Land Rover axle parts can be hard to find outside of major cities. To  accusations of sacrilege, Tyler responds by pointing to the American tradition of pragmatism when it comes to keeping these trucks on the road.

“The original Rovers group [in the United States] was really big into modifying them for their needs,” he says. “Back then, there wasn’t an aftermarket for these vehicles, which led people to do engine swaps and try out other components as well.” 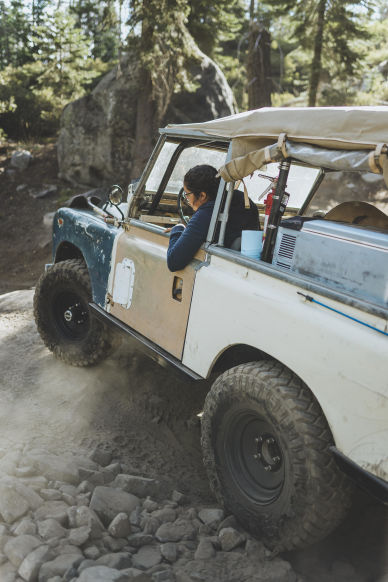 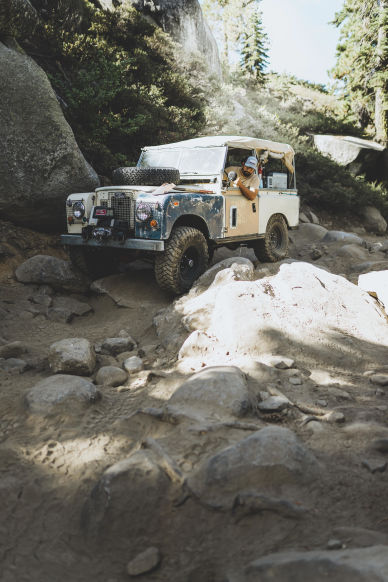 One of the most distinguishing features of Tyler’s Land Rover is its color scheme, yet another product of real use and pragmatic repairs.

“The passenger side hasn’t changed much,” says Tyler, laughing, “but, yeah, I’ve added some character to the driver’s side.”

That blue front fender found its way onto the Land Rover after Tyler, out with some high school friends in the desert near his home, found himself off-camber and sliding down an embankment. Luckily, a family friend had a fender of the same style – if not the same color – sitting around.

And that gold driver’s-side door?

“I did something silly and banged the door into a rock,” says Tyler. “Another family friend from the old Aluminum Workhorse/North America Land Rover Owners Association had one lying around that I picked up.” 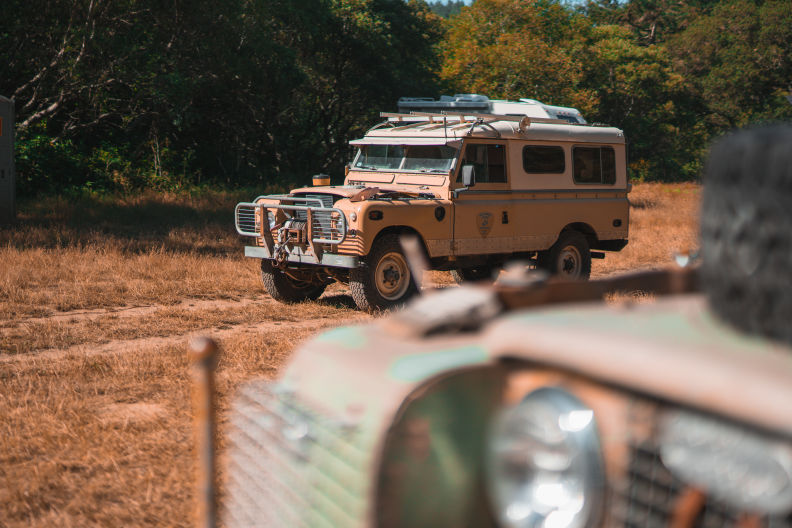 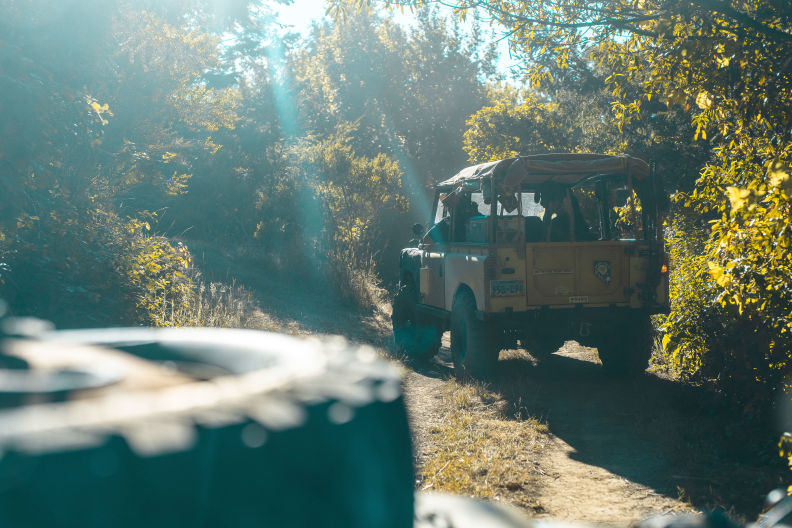 For Tyler and Marvin, the joy of building and repairing these old Land Rovers ranks right alongside the fun of driving them. To date, Marvin has owned more than forty Land Rovers, including the two currently in his garage, a daily-driven Series IIa 88 and a Series IIa 109 Ambulance. Tyler, meanwhile, also  has a Series IIa 109 wagon of his own that will soon undergo a transformation into a full-fledged crawler/expedition rig, complete with 40-inch tires capable of conquering most anything Moab or Fordyce can offer. Also on the agenda is a milder build on his partner Julia’s Series IIa 88, which will yield yet another Rubicon-ready adventure rig. 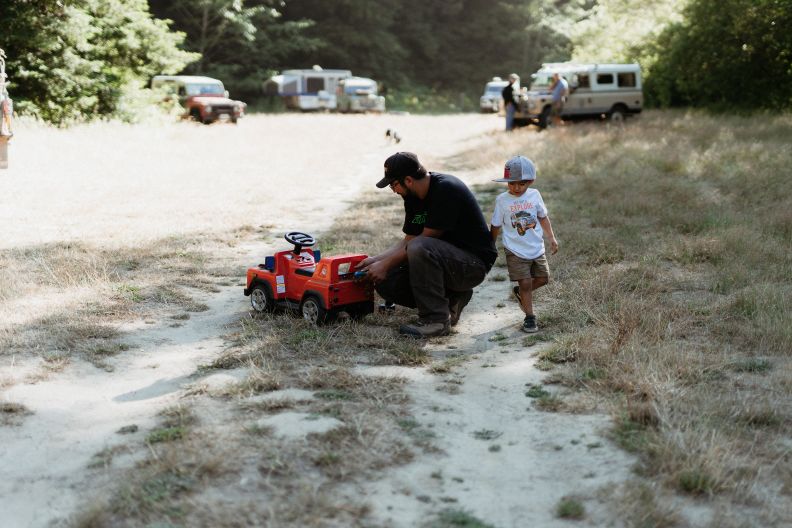 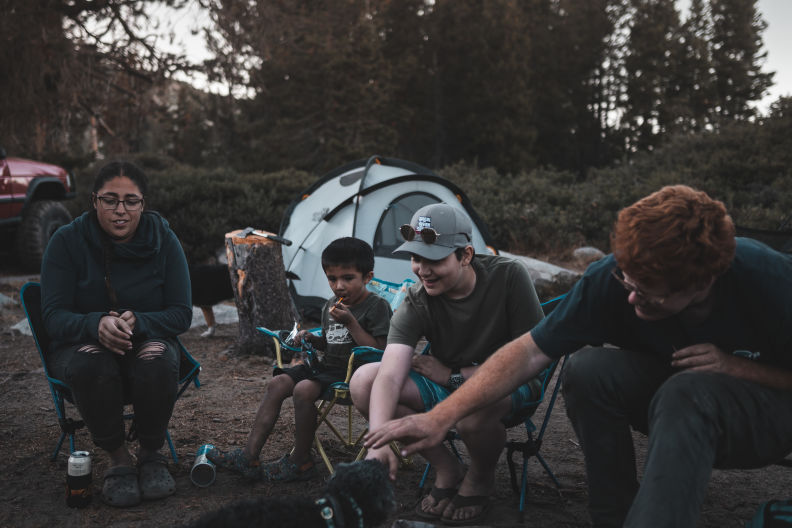 At this point, though, one might reasonably wonder why Tyler hasn’t abandoned the obscurities and headaches of Land Rover ownership for a more popular Jeep or Toyota platform. To this query, Tyler points to his familiarity with Land Rovers and to the connection he’s had with them since childhood. What’s more, says  Tyler,  having something different on the trail is just plain  fun.

“There are so many Toyotas and Jeeps out there,” he says. “It’s just nice to do your own thing.”

A California-based writer and photographer, Greg Bodene has been a Land Rover fanatic since he first stumbled across the Camel Trophy Series one late night in the mid-1990s on the long forgotten “ABC Wild World of Sports." You can follow his latest adventures on Instagram at (@jeth_rover). 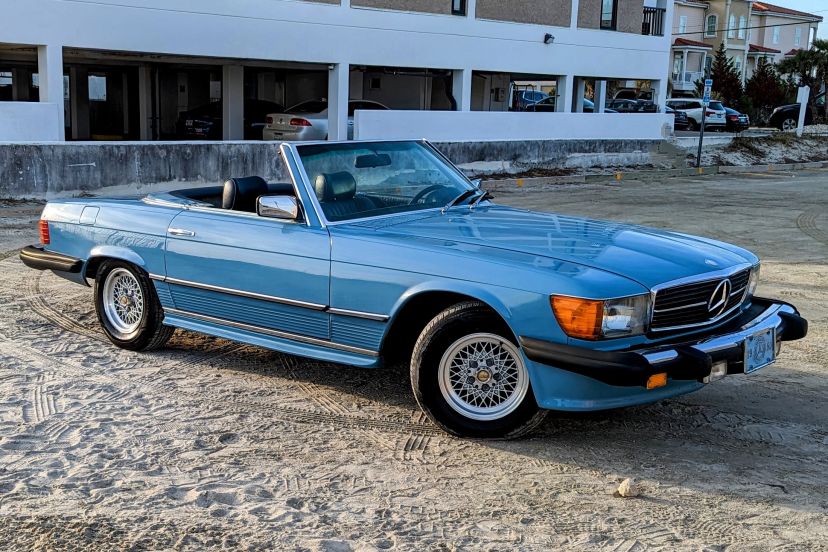 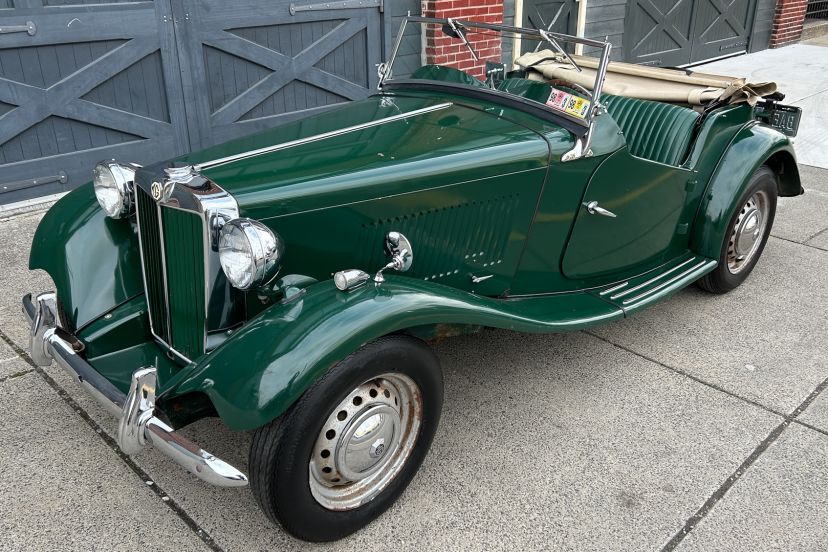 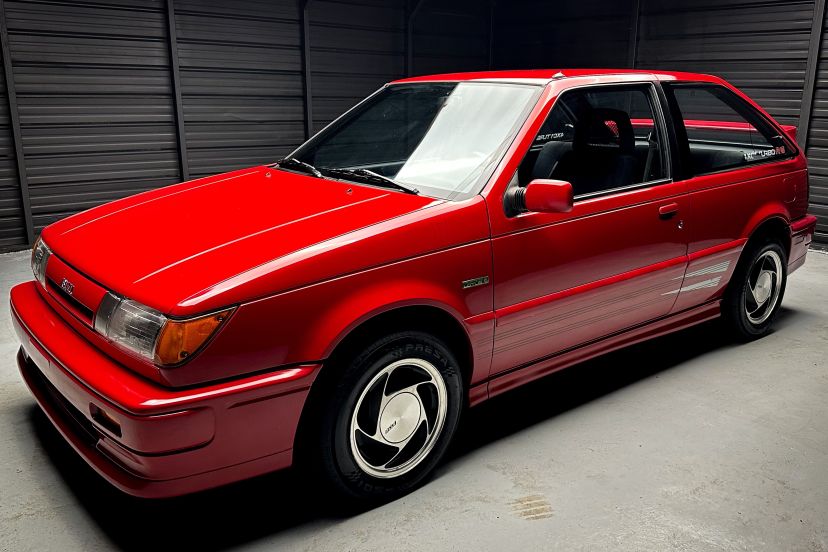